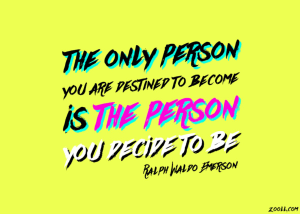 Tip One: Look inside

Sometimes we feel lost and look for guidance elsewhere. But ultimately, you’ll know what you want to do and who you want to be. And sometimes you’ll know how you want to get there. Sometimes we get distracted by other people’s plans for us and other people’s opinions about how our lives should be, often sold to us as their wisdom. But you should follow your own heart and instincts. And if you mess up, that’s ok – at least you’re being yourself and being true to who you are.

Tip Two: Stop comparing yourself to others

By all means, get inspiration from others and have role models to look up to. But remember that nobody’s path will be the same as yours and you’ll never be able to follow the footsteps of someone else. Comparing yourself with others will only highlight the flaws and gaps, that aren’t actually a bad thing. Forge your own path, take the road less travelled and focus on bettering yourself instead.

Tip Three: Take one step at a time

There may be loads of things you want to work on. Or maybe there’s just a couple. But you won’t change everything over night. Take your time and plan your time. Be realistic. Focus on one thing at a time and create a plan for it. Build a habit for one thing before incorporating something else. Don’t overwhelm yourself with lifestyle changes and restrictions and so on, because all it will do is push you back into the arms of your old self.